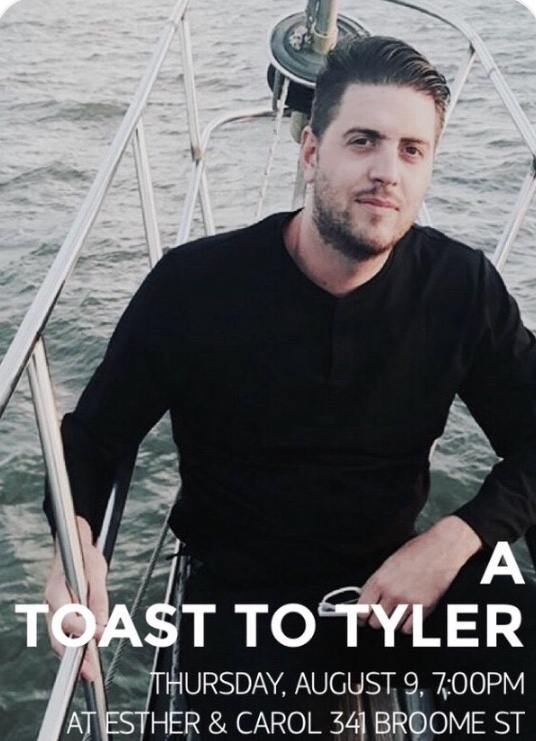 Please share a memory of Tyler to include in a keepsake book for family and friends.
View Tribute Book

Tyler Woodworth Bronzino entered into the threshold of eternal life on July 31st, 2018. We trust that in heaven all that has become disconnected and fragmented has been restored and made whole once more. Tyler is at peace resting in the loving arms of the Good Shepherd.

Tyler was born in Princeton, NJ. He attended Maurice Hawk Elementary and Community Middle School in West Windsor where he enjoyed school, community sports and music, playing Little League Baseball and cello in the school orchestra.

In St. Augustine, FL, Tyler continued his interest in baseball, then began to play high school basketball as well in Marietta GA. He graduated from D.H. Conley in Greenville, NC in 2007. Tyler began his college education at East Carolina University, NC where he excelled in business courses, and then graduated from UNC Chapel Hill in 2011 with a bachelor’s degree.

Tyler worked for KIA in Greenville, and then went to NYC and worked for ZocDoc, Revel Systems and Feedvisor as a Sales Representative.

Tyler will be remembered for his love of family and friends, of sports and music, for his intelligence, perseverance and resilience, and for his warmth and affection.

He will meet his father Michael Bronzino, grandfathers Donald Woodworth and Paul Bronzino, Sr., grandmother Olympia Bronzino, and nieces Kim and Laurie Jann, at the gathering of spirits and festival of friends where we will one day all meet again.

A funeral will be held for Tyler at St. Timothy’s Episcopal Church, 107 Louis St., Greenville, NC on August 25th, 2018 at 4 pm, with a reception to follow. All are welcome.

Flowers will be accepted in his memory, or you may make a contribution to the Boys and Girls Club Triple Play Program in Greenville, NC in his honor.  Donate online at http://www.bgccp.com/programs/sports-fitness/ or call 252-355-2435.

The Triple Play program is a comprehensive strategy that nurtures the minds, bodies and souls of our members. The goal of the program is to improve Club members’ knowledge of healthy habits, good nutrition and physical fitness; increase the number of hours per day they participate in physical activities; and strengthen their ability to interact positively with others and engage in healthy relationships.

Share Your Memory of
Tyler
Upload Your Memory View All Memories
Be the first to upload a memory!
Share A Memory